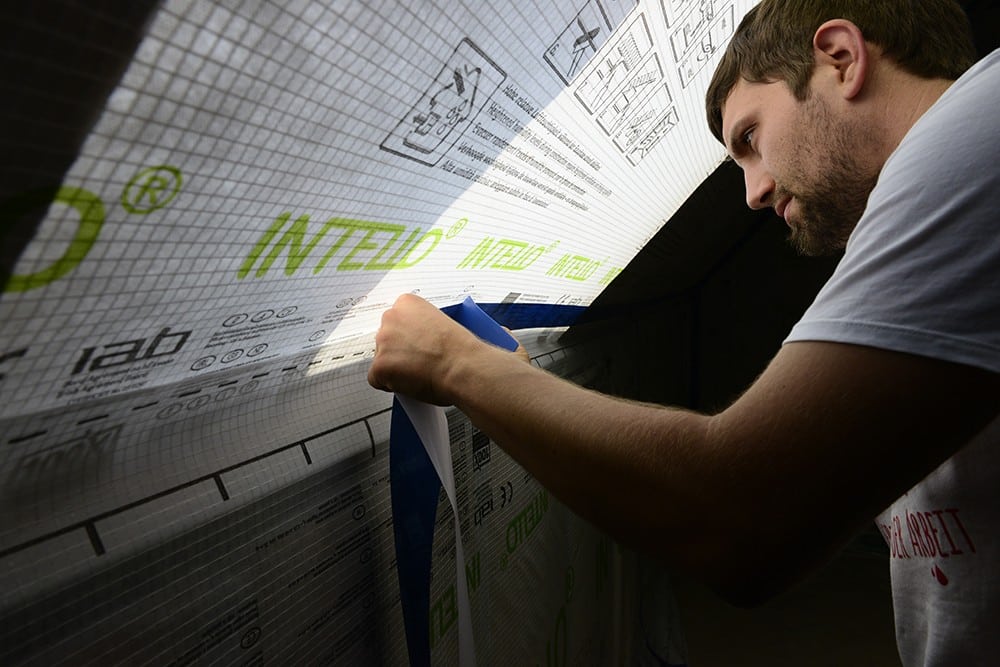 Table of Contents -
A drop of water brings clarity: the influence of surface tension
Water drop test
Resistance to moisture: why are there differences?
See yee, who join in the endless union — Durability: experience and laboratory tests
Consistent rules: standards for bonding agents create a basis for comparison
Summary: permanent adhesive joints are only possible with good systems and the right handling

Knowledge about the fundamentals of adhesion technology and about the loads that will actually be acting in practice is crucial in order to be able to carry out reliable project planning and testing.

In Adhesive Tapes – Part 1 we looked at types of adhesive and how they stick.
Now let’s focus on key properties.

A drop of water brings clarity: the influence of surface tension

There is a commonly held myth that an adhesive should be able to stick to every surface. And if an adhesive bond doesn’t hold as desired, then it’s always the adhesive agent’s fault! However, this assumption is false. Nobody would think of taking two pieces of firewood, applying wood glue to them, pressing them together briefly and then pulling them apart again immediately, and then saying that the glue was responsible for the fact that the bond didn’t hold.

The quality of a given bond is always dependent on the bonding agent, the subsurface and the method of applying the bond. The release films used are evidence that not all membranes are suitable for adhesion: some adhesive tapes can be easily removed from their release films. On the other hand, there are films that tapes bond well too, but which then become detached under tension.

Finally, there are also films that adhesive tapes cannot be removed from at all. The surface tension of membranes is responsible for all of this. This tension describes how well a given membrane can be ‘wetted’ by an adhesive; in other words, how well the adhesive can get close to the surface of the membrane to be stuck. The surface tension of a membrane cannot be seen, and this value is specified in data sheets by a limited number of manufacturers. 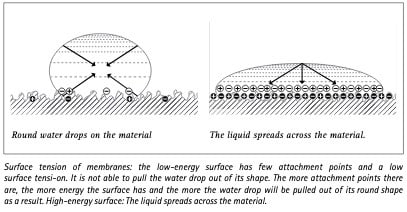 How can one estimate surface tension on a construction site? One possible method here is the water drop test: a drop of water is placed on the surface of the membrane and how well the drop of water spontaneously wets the surface is observed. The greater the surface tension (surface energy) of the membrane, the greater the likelihood that the water drop will be pulled out of its drop shape. This indicates a stronger and more reliable adhesive bond with an airtight membrane. Of course, this test does not provide precise information, but it has proven useful in practice over a long period.

Membranes with a surface tension of >40 N/mm are recommended for permanent airtight adhesive bonds. Membranes with surface tensions significantly below this value are often used in building practice. In order to supply the market with adhesive tapes that can still stick to these lower quality surfaces, large quantities of resins are added to acrylate dispersion adhesive tapes, in particular. These resins stick aggressively to poor surfaces.

However, the problem here is that resins can oxidise with oxygen, become brittle over their service lives and lose their adhesive strength. To prevent this from happening, it is recommended to ensure that adhesive tapes that only contain pure acrylates are selected. As well as being used for adhesive bonds for membrane overlaps, acrylate adhesive tapes can also be used on joints to adjacent building components consisting of timber, stone, wood fibreboards, plaster and concrete. This is possible as long as the surface is generally even, free of dust and resistant to abrasion.

If all three of these prerequisites are not fulfilled by a given surface, it can be pre-treated with a primer. Primers for acrylate tapes are applied in liquid form and differ from undercoats in terms of their mechanism. An under-coat penetrates deep into the surface and strengthens it. A primer for an acrylate adhesive tape is designed to penetrate into the subsurface and also to form a film on the surface that levels out any unevenness. These primers have proven themselves in practice. It is critical that the primer is suitable for the adhesive tape: i.e. one should always think in terms of overall systems. 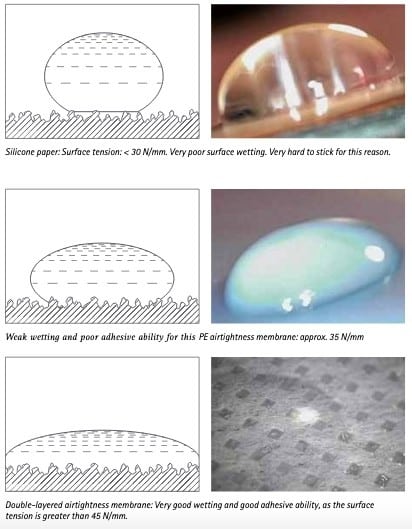 Resistance to moisture: why are there differences?

Nobody wants moisture on a building site, but regrettably, the reality is often very different! Adhesive tapes have to be able to reliably withstand the challenges of moisture after they are installed. The first protective layer is the backing material that is used. A film is clearly more resistant to water than paper. However, moisture does not always come only from the outside, but often from the subsurface too. In this case, the advantage of the external protective effect of the film is reversed, as the moisture cannot escape through the film and builds up instead between the adhesive and the film.

As already described, acrylate dispersion adhesives contain emulsifiers in their adhesive film after production. A characteristic of emulsifiers is that they store water, and they are still capable of doing this years later. If an acrylate dispersion adhesive comes into contact with water again, the adhesive re-emulsifies, often assumes a white colouring and can lose adhesive strength. Pure acrylates are fully water-resistant, as they do not react with water in this way, their adhesive strength is preserved.

See yee, who join in the endless union — Durability: experience and laboratory tests

Reference is often made to the positive experience observed over the last 20 years with regard to the durability of adhesive tapes. When we plan and build a house nowadays, clients expect the built structures and the materials used to have a service life of 50 years or longer. As a result, it is even more important when selecting adhesive tapes to take into account long experience in the marketplace alongside ageing tests that confirm high durability of bonding agents. 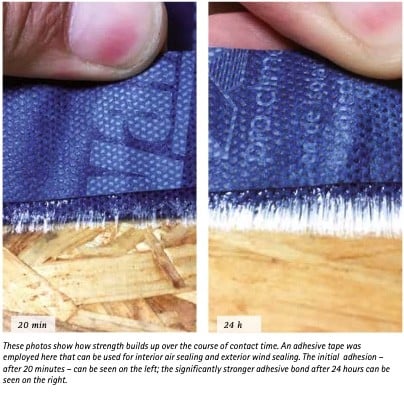 Presently, adhesive tapes are not regulated by standards in New Zealand and there are no uniform minimum requirements that have to be fulfilled by products. However, the recently published DIN 4108-11 2018 specifies minimum requirements for adhesives and tapes in Germany. This creates consistent quality standards and provides a basis for users to compare products.

Soft adhesives perform better in the ‘finger adhesion’ test, as they are better able to wet the surface of the thumb. This can lead to problems in practical construction applications, as soft adhesives generally have low cohesion forces. This standard contains various tensile strength tests on standardised sub-surfaces such as wood and membranes, as well as the possibility of having systems (membranes and adhesive tape) tested by manufacturers.

Many of the requirements demanded from adhesive tapes described above are formulated in this standard. For example, the tapes are pressed into place in a defined manner before conducting a pull-off test, and the test is carried out with a low pull-off speed so as to simulate the long-acting, low tensile stresses that occur in real applications in this test. Ageing also forms part of the scope of the standard. The standard forms a good basis for comparing adhesive tapes with one another and can help installers and project planners to make informed decisions globally.

Summary: permanent adhesive joints are only possible with good systems and the right handling

Permanent adhesive joints on construction projects are feasible and can achieve reliable performance; nonetheless, damage to structures often occurs when joints become detached. Knowledge about the fundamentals of adhesion technology and about the loads that will actually be acting in practice is crucial in order to be able to carry out reliable project planning and testing too. An optimal end result can only be achieved with good handling, a high-quality subsurface and a suitable adhesive tape. All three of these criteria should be carefully considered by the specifier and the energy consultant on site.

Manufacturers who make statements about the surface quality of their membranes and about the production technology used in their adhesive tapes (solid acrylate or acrylate dispersion) and who offer long market experience, third party accreditation by reputable bodies (i.e. PHI, BBA, NSAI, BRANZ etc), appropriate ageing testing and engineering support should be preferred over suppliers who provide little or no information about their products. 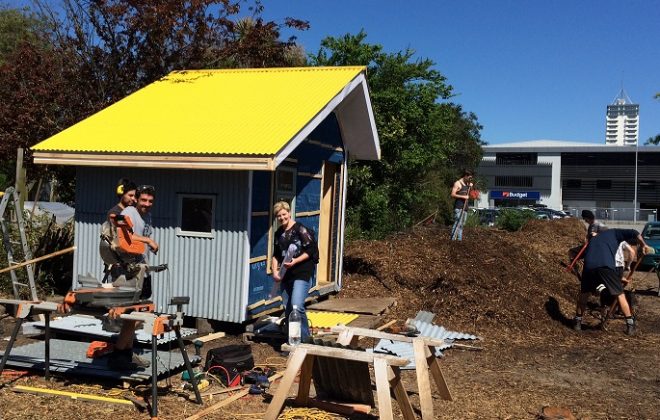 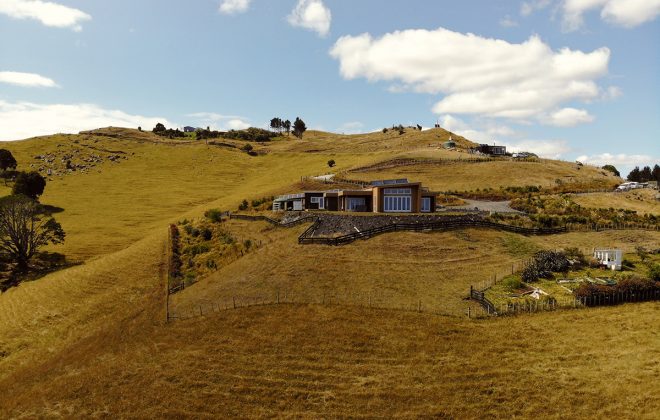 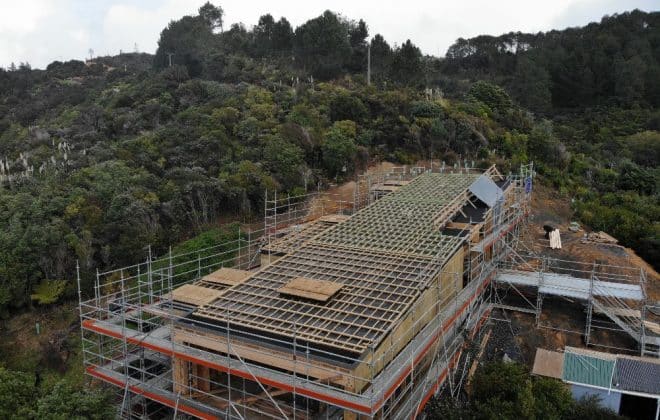